Summary
Cannot find a way to update the plugins.

Steps to reproduce
I’m currently on Playbooks version 1.29.1. According to Github, there should be available several more major 1.32.2 and a minor release 1.29.2 which all are not in beta stadium.

According to the manual somewhere (it does not really state where) should be a link to upgrade the plugin. I cannot find this anywhere.

The plugin was prepackaged with the mattermost package. Do I have to just replace the .tar.gz & tar.gz.sig files in the prepackaged_plugins folder? Or do I just have to overwrite the playbooks folder in plugins? Could not really find a description. 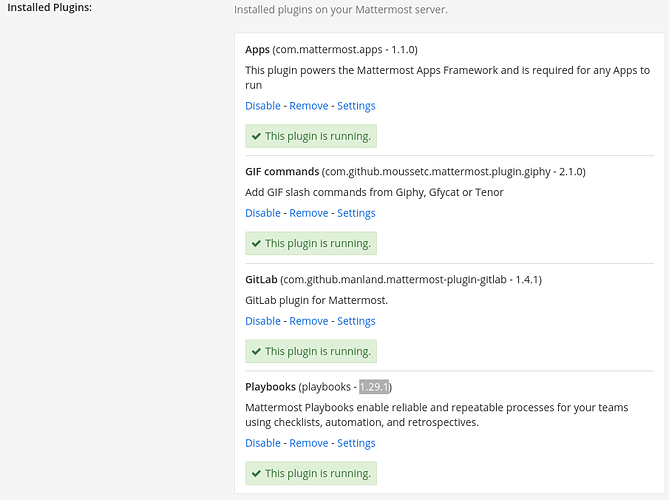 Observed behavior
Unclear instructions on how to update (prepackaged) plugins.

Update:
Just downloading the bundled release files to the prepackaged_plugins folder and adapting the ownership does not seem to be enough to initiate an update/a possibility to update using the System Console…

Hi q-wertz and welcome to the Mattermost forums!

1.29.1 is the version bundled with 7.2.0 and there’s no newer version available in the Marketplace so far. If there would be an officially released version in the marketplace, you would also be able to directly update it from there (menu at the top left, marketplace, installed plugins, update).

Witht he upcoming 7.3.0 release, a newer version of the plugin will be bundled and also available in the Marketplace then, but if you want to manually update the plugin, you need to enable the local plugin uploads by changing the configuration option PluginSettings.EnableUploads to true in your config.json file. When you reload the configuration then (or restart your Mattermost server), you will see that there’s an upload button available in the plugin management section of your system console where you can then upload the tar.gz file to replace the currently installed playbooks plugin with the new version.

thanks a lot for the clarification