Slack migration does not import private channels or DMs

I can see my public channels and files, but I can’t find private channels anywhere.
Any clues?

Hi @Lanhild and welcome to the Mattermost forums!

Unfortunately, this is expected since the Slack exporter does not export them, so there’s nothing for the Mattermost side to import

This is also noted in the documentation you linked:

Hey @agriesser
Slack exports content differs depending on your plan. The plan of the workspace I exported does contain DMs and private channels. The issue is on Mattermost side not importing them. 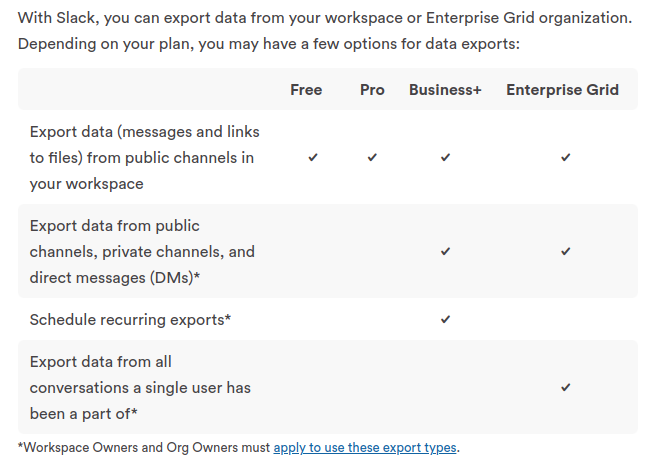 Overview of my workspace export window

Alright, thanks for the clarification - I was not aware of that (the docs should be updated then, I guess).
Can you post an example string in the exported dump for a message in a private and for one in a public channel as well as the record which creates the channel itself?
Ideally, you would also share such an example for a direct message - maybe I can see what’s the problem then.

Well. After reading through the channels.json I found out that I was mistaken. The channels I don’t see in my Mattermost instance are Groups in Slack. Does Mattermost not import chat groups from Slack?

Also, I can’t seem to understand how DMs are imported, I don’t see them in my instance

What I can try for Groups is to take the values in the groups.json file from the archive and add them in channels.json in the appropriate format. I think this way it can work. Though I still don’t know how to import DMs

This has definitely changed. I’ll create a ticket to update mmetl. Thanks for bringing this up @Lanhild.

Alright. FYI, the Slack export seems to put private channels (I think?) into the groups.json file inside the archive. From what I read public channels are in channels.json and Group DMs inside the mpims.json file.

Just to summarize what’s already been said, the import works very well for public channels. Though, private channels and group DMs don’t seem to be imported